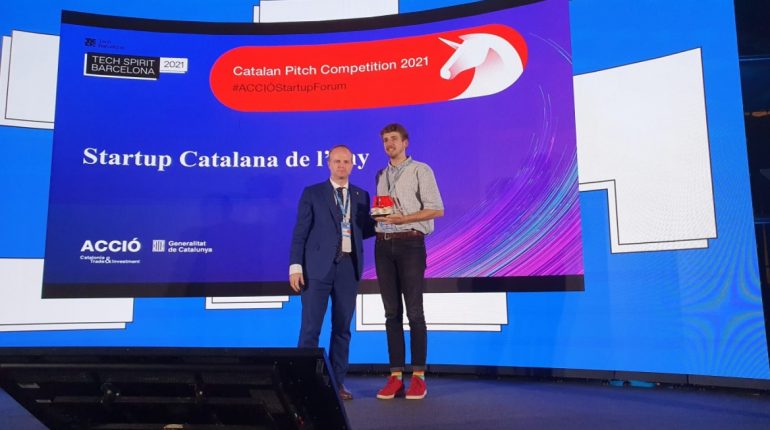 The Catalan startup and BHH member Nixi for Children has been awarded as the Catalan Startup of the Year. The company has won the first edition of the Catalan Pitch Competition organized by ACCIÓ -the agency for business competitiveness of the Department of Enterprise and Labor-, which has become the showcase for the best entrepreneurial projects in Catalonia in the fields of health, ICT and deep tech with the aim of boosting the search for funding.

The award was presented during the second edition of Tech Spirit Barcelona -organized by the Tech Barcelona association- by the Secretary of Enterprise and Competitiveness, Albert Castellanos Maduell. It recognizes the Catalan company for its business model, team and technology. Nixi for Children has been the company most voted by the public attending the Catalan Pitch Competition among the 24 finalists startups, which have made several pitches to entrepreneurs and investors present at the event.

Nixi for Children has developed a virtual reality system to reduce children’s anxiety during a medical treatment such as surgery or radiotherapy treatment. Using virtual reality goggles, children can preview the treatment they will undergo before visiting the hospital. Since 2019, the company has been validating its technology with the Germans Trias i Pujol Hospital in a clinical trial and is currently preparing for international expansion.

During the presentation of the award, the Secretary of Enterprise and Competitiveness assured that the companies participating in the Catalan Pitch Competition “are a sample of the talent in the country, the richness of the startup ecosystem in Catalonia and its transversality”. Castellanos adds that “the business initiatives that have been presented today are the result of the effort and talent of entrepreneurs, as well as public policies that have nurtured this ecosystem. Public policies that have understood that they have to count on the collaboration of the private sector, since they are the most flexible, fast, efficient and with more capacity to attract private investment”.

The Secretary of Enterprise and Competitiveness has stated that the pandemic “has accelerated the pace with which we have to face a transformation based on digitalization and sustainability and that will require continuing to bet on the startup ecosystem”. “A policy of innovation and transformation of the productive model cannot be understood without the role of startups,” he emphasized.