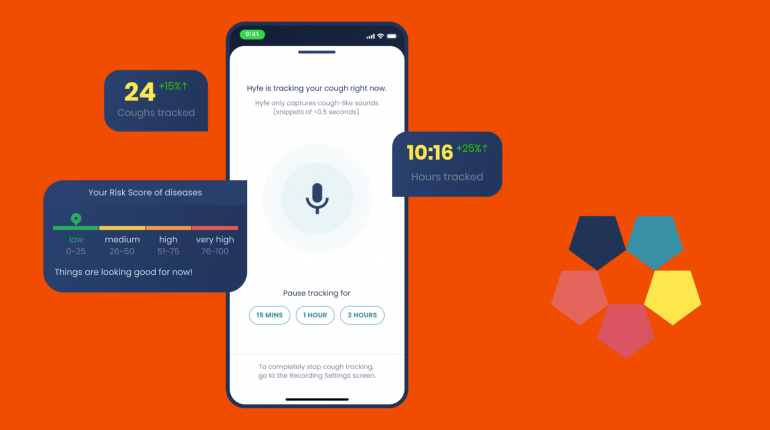 BHH member Hyfe, an innovative new app for smartphones which tracks users’ coughing habits, has announced that it is now available in the US. Compatible with both Android and iOS devices, Hyfe uses specialized acoustic artificial intelligence algorithms to analyze users’ coughs, with individual markers including volume and regularity helping people identify any underlying illnesses. These markers can be used to detect anomalies and trends, acting as an early-warning system for conditions such as COVID-19 and, potentially, even lung cancer. Hyfe is an AI-powered cough identification and tracking technology which enables users to passively monitor their coughing habits, to better understand their overall wellbeing.

Developed by an international team of collaborators with a background in public health and led by founders Joe Brew, Paul Rieger, and Iulian Circo, Hyfe’s original function was to aid populations in areas that suffer from heavy pollution resulting in chronic respiratory conditions. Hyfe is a simple tool to allow individuals to understand their symptoms as well as to articulate them to healthcare professionals. It has now evolved into a powerful tool used by academics, researchers and telemedicine providers across the world.

Commenting on the launch of Hyfe in the United States, CEO and Co-founder Joe Brew, said: “We are delighted to launch Hyfe in the US, and look forward to assisting individuals in monitoring and tracking their own health through cough patterns. One of the earliest uses of telehealth was around 140 years ago, when a doctor used a telephone to diagnose a child’s croup cough. Generations later, the potential for remote cough diagnosis and monitoring has still not been effectively scaled. While Hyfe is primarily focused on detecting the frequency of coughs, our ambition is to evolve the technology to eventually provide a digital diagnostic tool that can differentiate coughs based on different types of illnesses.”

Hyfe Co-founder Iulian Circo, added: “Coughing is a universal human behaviour that can reveal a huge amount about a person’s wellbeing. Despite this, coughing is commonly overlooked, and Hyfe hopes to change that. We believe that each cough represents an important biomarker for a range of conditions, but until now coughing has rarely been understood or analysed at scale. Our neural network can help users identify changes in their health in real-time. Our goal is to allow anyone with a smartphone to receive instant, accurate diagnostic support, whether they are a asthma sufferer in London or a mother of an ill child in rural Africa.”